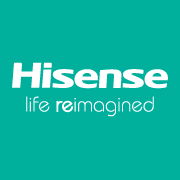 Hisense, the global manufacturer of premium consumer electronics and home appliances, has identified the consumer need for the latest innovative and on-trend products, and is taking full advantage of the fact that its exclusive High-Tech TVs are all being manufactured locally. Hisense Global began producing Smart TVs in 2011 and were amoung the first brand’s to do so. In South Africa today, Hisense currently occupies the number two space in TVs and, both of which are manufactured at the brands factory. The decision to open up the factory in Atlantis means South Africans can now own products that are Proudly South African, and competitively priced.

One of the current high tech product offerings is the Vision TV range which Hisense manufactures locally. The complete series consists of the following TVs:

Full High Definition TV display technology is a step up from the original High Definition (HD) with improved sharpness and image quality that can be seen prominently throughout the picture display.

All of these televisions are 3D TVs and boast an Air Mouse accessory that features voice-input control for the ultimate user convenience. They also have Google Play Store functionalities whereby users can download their favourite applications from the Play Store provided on the TV. Play games, read the news or check what’s happening in their social circles, the range from Hisense ticks every box.

Hisense also has plans to go big in the mobile segment in the next year, taking its offering up a good few notches and going neck-on-neck with top competing brands. The brand entered into the smartphone space late in 2013, and has since launched its Infinity range with a smartphone to meet every need. Look out for the Infinity Prime 1, Pure 1, Pro 1 and one of the first Phablets on the market in SA, the Hisense MAXE X1.

The key feature to look out for in Hisense smartphones is its Dual SIM Dual Standby function whereby both SIMS in the device are active and connected to a network – even if it’s two separate mobile network providers.  If the SIM’s are from the same provider, the user can make a phone call while the second SIM will remain in call waiting mode. If the SIM’s are from separate providers, the other SIM will automatically go into busy which bodes well for consumers who’d like to save on data costs or would like to use both a contract and pre-paid SIM option.

The smartphones that are due to be launched in 2015 are directly on par with the most advanced smart technologies to date and will impress with quality and sophistication at a competitive price.