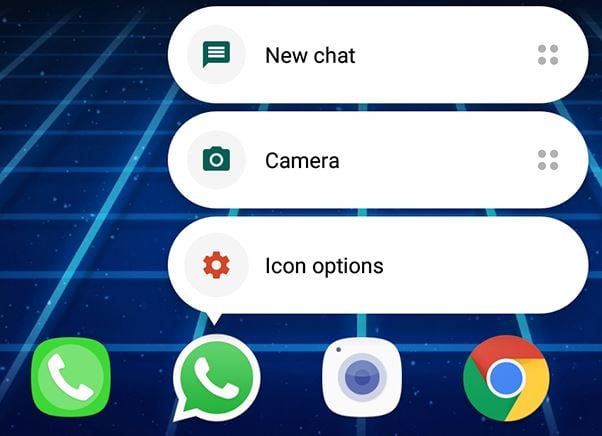 Launcher App Shortcuts on now bring tested on WhatsApp for Android. These shortcuts will take yo directly to a desired pre-mentioned place in-app as soon as you launch it. At the moment, there’s no word on when this feature will arrive for the general audience using stable builds as it only exists in the beta build right now. The App Shortcuts feature was first spotted by Android Police. The only issue with these launcher app shortcuts is that they sometimes miss the point and bring in more trouble instead of allowing you to fulfill the necessary stuff. For example, instead of allowing you to add a Status directly, or show your frequent or pinned chats, it gives you the option to open the camera, and the option to chat with people you don’t really chat with.

The ‘New Chat’ shortcut will be for those who use WhatsApp regularly, would know that a new chat is seldom ever used. Most often than not, we tend to speak to people that are already on our chat screen. We also see the shortcut for Starred messages.

To download the latest WhatsApp beta for Android version, sign up for the Android Beta Program on Google Play, or you can alternatively download the APK Mirror here.

A the moment, WhatsApp provides native widgets and shortcuts for the home screen, allowing you to set the camera as a separate shortcut icon, or a favourite person as well which will display their picture  as an icon logo, instead of an ugly star that is showing up in this launcher app beta feature.