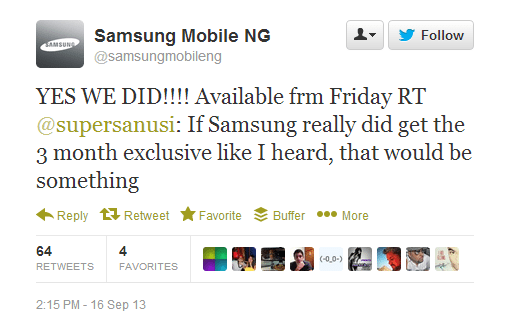 BBM for Android is coming on Friday – if you have a Samsung Galaxy phone. Samsung has finally confirmed the release date for the BlackBerry Messenger Android app. But before you get too excited, that news has come from Samsung Nigeria, which tweeted that the BBM app will be exclusive to Galaxy devices for three months starting this week — although BlackBerry is reportedly distancing itself from the talk of an exclusive deal.

After a long wait you’ll finally be able to download BBM and install the app on your Android device. The new BBM app swaps instant messages with other BBM users even if you long ago ditched your BlackBerry for a different phone.  The new app will have instant messaging and group chat from the start, with voice calls to follow later.

Since BlackBerry announced it would open up BBM to other phones, wrong’uns have targeted keen ex-BlackBerry owners with fake BBM apps, fooling phone fans into downloading the impostor app and hitting them with ads, spam or worse.

BlackBerry has struggled against the iPhone and more affordable Android phones in the last couple of years, and even the lure of the free and hugely popular BBM IM service has waned in the face of apps like WhatsApp or Samsung ChatOn — which, like the new BBM app, work across different devices so you can chat with friends and family even if they have different phones to you.