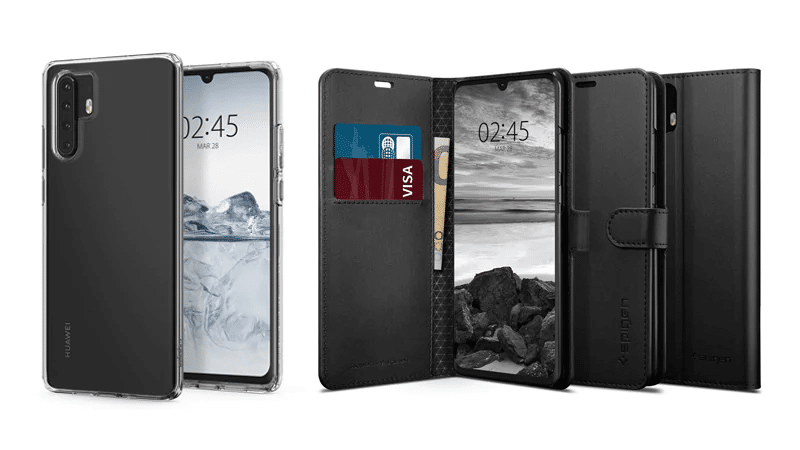 In the past few weeks, The Huawei P30 and the P30 Pro have been leaked numerous times! Our first glimpse of the device came when case manufacturer Olixar leaked photos of the phone in its cases. The leak showcased the P30 Pro and the quad camera setup on its back. It is a vertically stacked setup something similar to the one seen on the Samsung Galaxy A9 (2018). The smartphone is said to be the successor to the Huawei P20 Pro which launched in March last year. Like the Huawei P20 and P20 Pro, the P30 smartphones are also set to be unveiled at an event in March this year.

There are three different cases for the Huawei P30 Pro from Spigen. These case leaks clearly show the vertically mounted quad camera setup of the the P30 Pro along with a dual LED flash. A few angles also reveal the big display of the P30 Pro with a waterdrop notch at the top. The quad camera system is said to house a periscope-style imaging hardware for lossless optical zoom. The resolution of the sensors are unknown but a previous report does point to a 38-megapixel Sony IMX607 sensor with Dual Bayer technology and three speed native sensitivity of ISO 50/500/5000.

In the Spigen case images, it is clear that the P30 has a triple camera setup. These details have leaked before and we already know that the P30 is said to have a maximum of 40-megapixel and support for 5x lossless zoom. At the front, it is expected to have a 24-megapixel selfie camera.

A previous leaked render of the Huawei P30 hints at a 6-inch display with thin bezels and a waterdrop notch. It also shows a 3.5mm headphone jack which is a surprising addition since the Huawei P20 Pro didn’t have it. The render also revealed a USB Type-C port with a speaker grill right next to it. Rumours point that a Huawei HiSilicon Kirin 980 SoC will power both the P30 and the P30 Pro.

The Huawei P30 Pro is rumoured to sport an in-display fingerprint scanner as well as optical zoom. Whatever the case may be… We won’t have to wait long before Huawei unveils the P30 and P30 Pro. As mentioned above, the devices are set to be unveiled at an event in March this year.