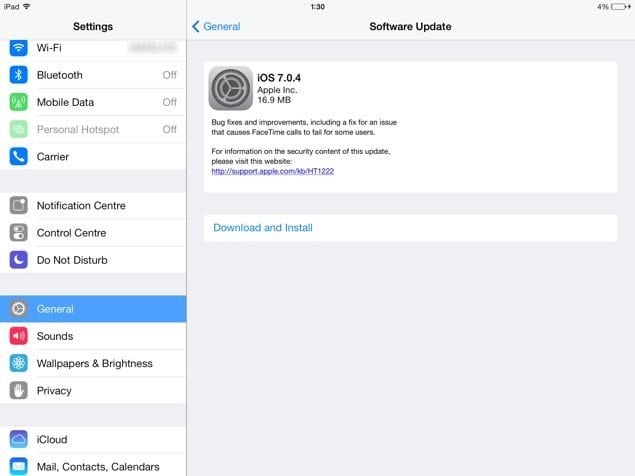 iOS 7.0.4 update for iPhone, iPad and iPod touch is now available for download as an over-the-air (OTA) update as well as via iTunes. Apple says iOS 7.0.4 brings bug fixes and improvements, including a fix for an issue that caused FaceTime calls to fail for some users. The included security update also brings a fix for an issue where app and in-app purchases could have been completed with insufficient authorisation.

According to Apple, in certain cases, a signed-in user was able to complete a transaction without providing a password when prompted. iOS 7.0.4 addresses this issue by “additional enforcement of purchase authorisation”.

Apple has also released iOS 6.1.5 that brings the fix for FaceTime issues and the security update to iPod touch (4th generation) users.

If you are using an iPhone 4 or later, iPod touch (5th generation) or later, iPad 2 or later, running iOS 5 or later, iOS 7.0.4 should be available as an over-the-air update for your device. Go to Settings > General > Software Update and iOS will automatically check for available updates. According to Apple, available updates download automatically if your device is connected to Wi-Fi and a power source. Tap Download to download the update and after the download has completed tap Install to update your iOS.

If you leave the update to download in the background, once the download has finished you will receive a notification saying an update is available for your device. Tapping Details will take you to Settings > General > Software Update. Tap Install Now to install the iOS update. If you decide to leave the installation for later Settings will display notification badge until the update has been installed.

Alternatively, you can install the update via iTunes by following the instructions at this page.

We strongly recommend you back up your iOS device to iCloud or with iTunes before installing any iOS updates.