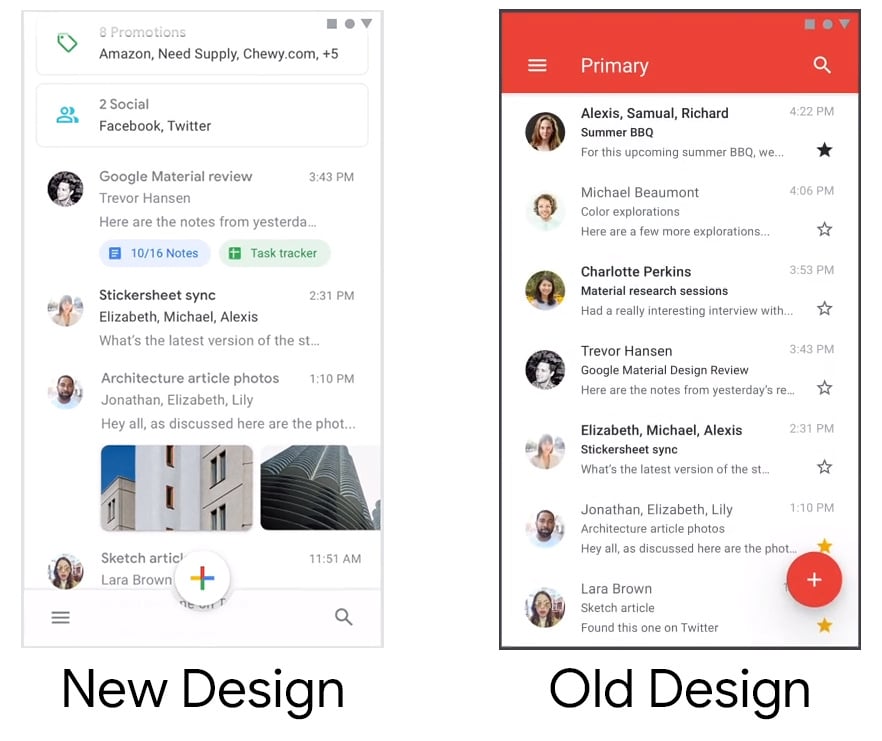 For all Android users who have used the Gmail app, there’s a strong sense of familiarity to the whole thing. It’s been the same way for a while now. However, the red bars and familiar look is set to change, as Gmail is now rolling out its new Material theme for Android. The theme is focused on the colour white, putting key features at the front and centre, such as a new search bar to help you find emails quickly. While it’s limited to Android for now, the new theme is also likely to roll out for iOS soon.

The change in theme was announced last month, and is now rolling out as promised. The updated app is now listed on Google Play, with the changelog “New year, new look. Gmail Android now has an updated look and feel.” The last update was on Wednesday, the 20th of February.

Also included are the new font that is seen on the Material theme, a colourful new shortcut to quickly jump into composing new mail, a redesigned menu and a new method to switch between different linked accounts. Users with two or more Google accounts linked on the same smartphone will now need to tap the profile picture icon in the top right corner to switch between different accounts; this step previously needed the user to go into the menu on the left.

There are some additional changes as well, including being able to see and quickly access attachments in the Inbox view without first entering the mail, and also more visible warnings when a mail is deemed suspicious. This can include ordinary spam, as well as mails that might contain malware or phishing tools. The all-white look may not be the most comfortable on your eyes or most efficient for your battery life, but it is cleaner and allows better visibility of text.