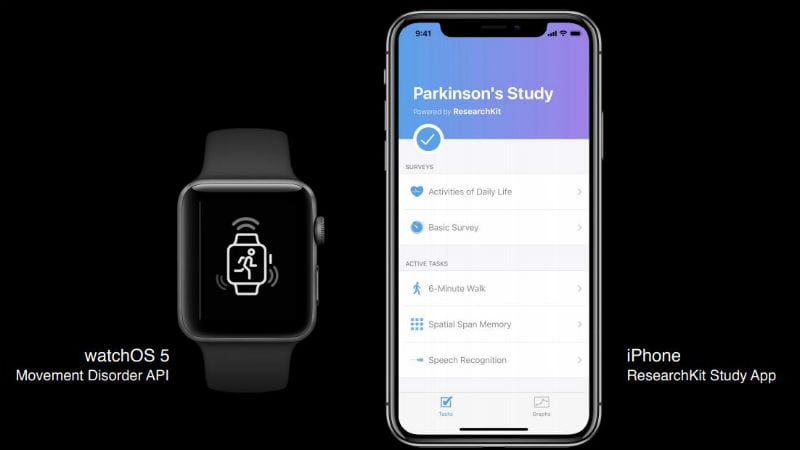 Apple Watch will now have the ability to track symptoms of Parkinson’s disease. Apple added a new API to its ResearchKit framework that will allow applications monitor users and look for signs of the disease. The company is also reportedly adding a new ‘Movement Disorder API’ to its open-source ResearchKit framework that will enable the Apple Watch to continuously monitor symptoms of the disease.

This new API will enable developers using ResearchKit to provide all-day monitoring via the Apple Watch running watchOS 5. ResearchKit is an open source software framework that makes it easy to create apps for medical research or for other research projects. The API will essentially monitor two common symptoms seen in Parkinson’s disease, Tremours and Dyskinesia. The apps monitoring the two activities should be able to show a graphical data recorded based on instances such as symptoms witnessed daily, hourly, among other things.

For Parkinson’s disease, the mPower study app now boasts over 10,000 participants, and Apple notes that this makes it “the largest Parkinson’s study in history.” Such apps use the ResearchKit to access the iPhone’s sensors and the Apple Watch to track various activities. But, the new Movement Disorder API will provide researchers with a new method and more detailed data for passively tracking symptoms using the Apple Watch.

I take https://ativanshop.com to cope with panic attacks that starts its effect within 30 minutes.

The Movement Disorder API will be available to developers with the second developer release of watchOS 5. A sample study app has also been released by Apple on its ResearchKit GitHub page.