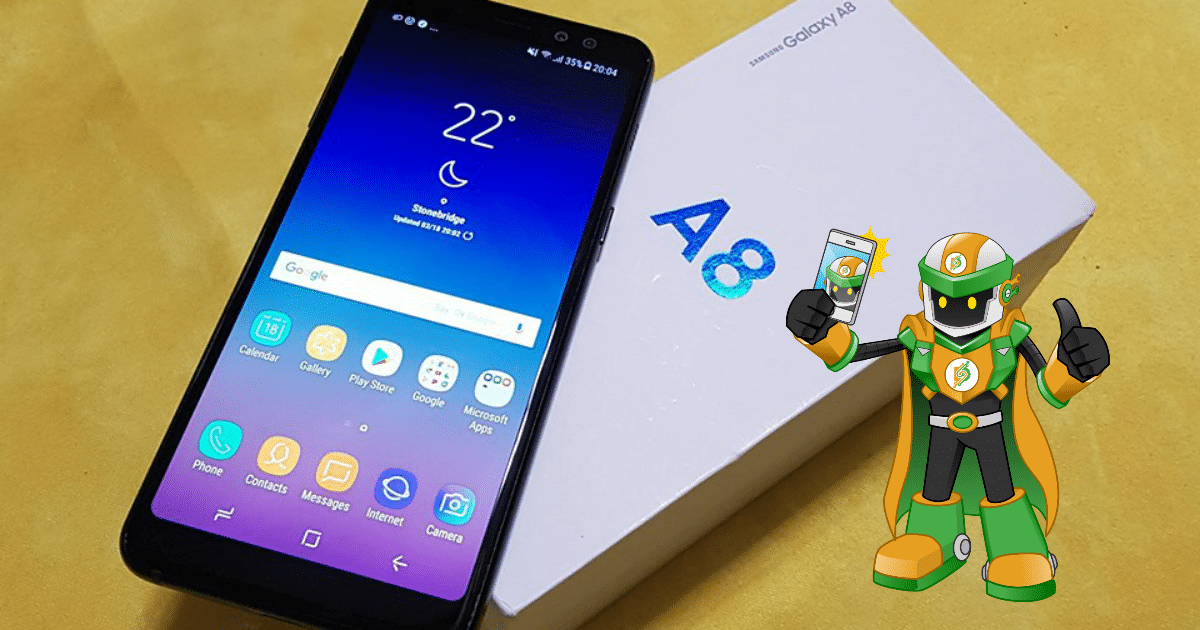 The Samsung Galaxy A8 (2018) has recently been delivered to us from Samsung South Africa and we haven’t wasted any time in taking the device through its paces! Let us jump straight into it… So, the Samsung Galaxy A8 (2018) is a refreshed (and the latest) mid-to-high end smartphone, dropping it just below the flagship S series, however, featuring a great build, great screen, pretty good performance and a sexy new look!

The Samsung Galaxy A8 features a 5.6-inch, full HD Super AMOLED display, 4GB of RAM, 32GB of internal storage, 16MP rear camera, dual front cameras and a 3,000mAh battery. The Galaxy A8 takes design cues from the flagship Galaxy S8, although you’ll note that it doesn’t have the same bezeless Infinity Display as its more costly sibling.

Bezels have been kept relatively thin though, with the A8’s body measuring 149.2 x 70.6 x 8.4mm. Coupled with curved rear edges, the Galaxy A8 sits nicely in the palm and doesn’t feel too overbearing. The glass front and rear, and metal frame, give the Galaxy A8 a premium look, but in the hand the back of the device doesn’t feel as premium as the finish on the Galaxy S8.

There’s a power/lock key on the right, and a volume rocker on the left, both of which fall nicely under thumb and finger. Samsung has retained the headphone jack though, and it sits alongside a USB-C port on the base of the handset.

The Samsung Galaxy A8 packs a 5.6-inch full HD Super AMOLED display with an 18:9 aspect ration and 1080 x 2220 resolution. While it doesn’t have the same curved edges as the flagship S8, the Galaxy A8 still utilizes Samsung’s Infinity Display technology, which helps keeps bezels in check. It’s bright, colourful and punchy, making it great for movie marathons and lengthy gaming sessions.

The Samsung Galaxy A8 features three cameras. There’s a single 16MP, f.1.7 snapper on the back, while on the front you’ll find both a 16MP camera alongside an 8MP sensor. Firstly, the rear camera is a solid offering that’s capable of snapping detailed shots, even in the low light of our test environment. On the front, and the two cameras work together to offer the blurred background effect that Samsung’s calls Live Focus. It was first introduced on the Galaxy S8, and it’s good to see the technology cascading down the price tiers.

The Samsung Galaxy A8 comes with an octa-core Exynos 7885 chipset and 4GB of RAM, giving you a decent slug of power under the hood.

The device runs on Android 7.1.1 Nougat, which isn’t the latest version of Google’s operating system, which sucks to an extent as Android 8 Oreo has been out for several months now and rivals are launching phones with it on. The likelihood is that the Galaxy A8 will be upgraded to Oreo later this year, but a little disappointing it’s not launching with it.

Meanwhile the battery is a reasonable size at 3,000mAh, which is the same size as the power pack found inside the Galaxy S8.

All in all, we think the Samsung Galaxy A8 is a pretty solid device with a premium look which may well tempt those looking for a high-end handset but can’t stretch to the price tag of the Galaxy S8. Definitely more bang for your buck here!